By James Leonard, University Communications
November 30, 2015
Southeast Asian American Legacies symposium, including free theater performances on campus, will serve as a precursor to the opening of the Hmongstory 40 exhibit in Fresno. 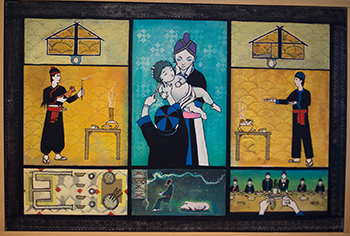 This year marks the 40th anniversary of the end of the Vietnam War, and with it, the beginning of the Hmong, Lao and other Southeast Asian migration from Laos and Thailand to the United States.

To commemorate the anniversary and celebrate the contributions and culture the Hmong people have brought to the U.S. — and California in particular — a statewide group of scholars and community leaders created the Hmongstory 40 project. UC Merced will host a symposium called “Southeast Asian American Legacies” on Dec. 4, in part as a precursor to the opening of the Hmongstory 40 exhibit in Fresno on Dec. 12.

The UC Merced symposium will include a keynote address, two panels of scholars and experts, a poetry reading and a pair of free theater performances in the evening.

The event is organized by Professor Ma Vang, UC Merced Library digital assets programmer Alisak Sanavongsay and Merritt Writing Program lecturer Seng Vang, and it is co-sponsored by the Center for the Humanities, Chancellor Dorothy Leland, Provost and Executive Vice Chancellor Tom Peterson, and the School of Social Sciences, Humanities and Arts.

“This symposium will bring together leading scholars, artists, writers and community members to discuss the Vietnam War and its human legacies,” Vang said. “It will be a critical reflection of the end of the Vietnam War from the perspective of Southeast Asian Americans.”

Nearly 387,000 Southeast Asians live in the Central Valley, Vang said, and 82,000 of them are Hmong. Merced, which is home to 7,200 Hmong people, has the largest per-capita Hmong population of any city in the U.S.

“Many prominent and influential Hmong are in Merced County or have roots here,” said Lee Lor, executive director of the Merced County Education Foundation and a member of Hmongstory 40. “For UC Merced to host a symposium honoring and sharing the rich Southeast Asian experience further deepens the community conversation around race, ethnicity and culture.”

The symposium’s daytime program will be held in the California Room from 8:30 a.m. to 4 p.m. The keynote address, by University of Connecticut Professor Cathy Schlund-Vials, will be at 11:15 a.m.

The evening performances, which begin at 7 p.m. in the Dr. Lakireddy Auditorium and are open to the public, should be of particular interest to the Merced community. One focuses on the refugee experience and one on Hmong-Lao friendship, and the event will include conversations with the artists.

“The Center for the Humanities is proud to collaborate with this symposium, as it directly addresses our community outreach goals, as well as our intention to increase the visibility of humanities studies at UC Merced,” said Professor Ignacio López-Calvo, the center’s director. “This symposium will allow our students and faculty to familiarize themselves with Southeast Asian history, presence in the United States and cultural production.”

The symposium will provide a natural segue into the Dec. 12 opening of the Hmongstory 40 project’s crown jewel, a traveling exhibit that will start at the Fresno Fairgrounds and will remain there through Jan. 2. Vang said the exhibit is expected to be on display in Merced in May.

The exhibit is the result of an intense, three-year grassroots effort to document the Hmong journey from Laos to California. It tells the story and celebrates the history and struggles of the resettlement of Hmong refugees through photographs, written stories, fine art and artifacts.

Hmongstory 40 has another on-campus presence at the UC Merced Art Gallery, where a selection of artworks created for the main exhibit is now on display. The UC Merced art display will remain open through Jan. 26.

Vang arrived at UC Merced as the university’s first Hmong studies professor in 2014, just in time for the planning stages of the Hmongstory 40 project. She was born in a refugee camp in Thailand and was in the fourth grade when her family immigrated to the United States — but even given her first-hand experience and her graduate work in ethnic studies at UC San Diego, she found great value in working and conducting research in the Merced area.

“Just being part of the Hmongstory 40 project allowed me to meet and work with some amazing people in the community, and more quickly than I would have otherwise,” Vang said. “To have a job in a community where my research is relevant, and a region where students will benefit from this growing investment in education — that is an amazing combination to have happened.”

In the 1960s, Ernest Lowe took his camera into the rural towns of California’s Central Valley, documenting the lives and struggles of farm-working...

Arts and CultureCampusEventsFacultyHumanitiesHistorySchool of Social Sciences Humanities and Arts