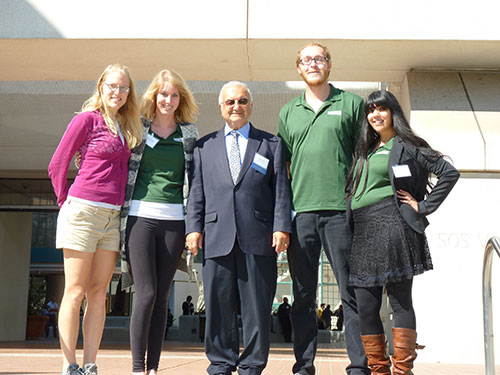 The fellowship began in 2007 through a generous gift from Sarah R. Kurtz, principal scientist in the National Center for Photovoltaics at the U.S. Department of Energy’s National Renewable Energy Lab (NREL). Kurtz established the fellowship in the name of the Dan David Foundation, which awarded her and NREL colleague Jerry Olson that year’s prestigious Dan David Prize for their groundbreaking work in concentrating solar power systems using multi-junction solar cells.

The Dan David Solar Fellowship, which exists in perpetuity, supports undergraduate and graduate students working in the area of solar energy and concentrating photovoltaic devices and systems. Applicants had to apply for the fellowship, and the applications were reviewed by a panel of solar energy experts. For the 2015-16 academic year, each of the four awardees will receive $2,000.

This year’s recipients are:

“All four recipients are outstanding students with very bright futures,” UC Solar Director Roland Winston said. “We’re proud to have them as members of the UC Solar team.”

With a new $20 million federal grant, UC Merced becomes part of a multi-institutional research collaborative to develop artificial intelligence — or...

The campus community and its partners can learn more about the importance of renewable energy at this year’s Energize Merced conference, an annual...

Solar Panels Over Canals Can Save Money, Energy and Water, Study Shows

Covering the 4,000 miles of California’s water canals could save billions of gallons of water and generate renewable power for the state every year...