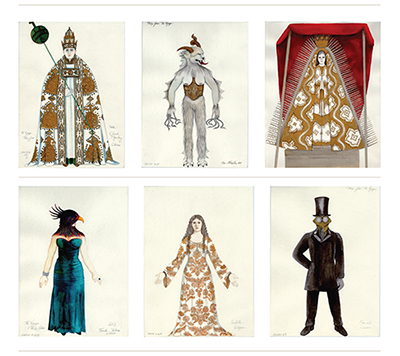 In a decades-long career, UC Merced Professor Dunya Ramicova has designed thousands of memorable costumes for stage and screen.

Soon, her renderings of those costumes will be available in the digital world and on display at the Merced Multicultural Arts Center. Both will spotlight the extensive and diverse career of an Emmy Award-winning costume designer who also is UC Merced’s first arts professor and a founding faculty member.

The art exhibit, opening Oct. 16, is linked to an ongoing campus project to create digital images of Ramicova’s costume design renderings. More than 2,000 images are being carefully scanned and processed into digital versions at the UC Merced Library.

“On one level, it’s always great to get the body of work of one professor,” said Digital Assets Librarian Jerrold Shiroma. “But it’s also a really beautiful collection. I love to look through all the drawings as they come in.”

When complete, the collection will be one of the few digital versions that encompass the work of a single costume designer.

The renderings show the arc of a career that began in the 1970s. Ramicova has designed costumes for more than 150 productions that include theater, opera, ballet, dance, television and film.

She recently retired from the design profession and plans to retire from teaching next year.

“I don’t know that I’ll miss costume design as much as I’ll miss my students,” Ramicova said.

Over the years, Ramicova taught costume design at the Yale School of Drama, Harvard University, UCLA and UC Santa Barbara. In 2004, she moved to the UC’s newest campus, where she has taught roughly 1,000 students in classes such as the History of Clothing, Costume and Fashion.

Ramicova said she has enjoyed working with the attentive and hard-working students she’s had at UC Merced.

“I feel like our students here are the most hungry to learn, and they are extremely nice young people,” she said.

Ramicova has cultivated a distinguished career both inside and outside the classroom. In 1968, her family came to the U.S. as political refugees from the former Czechoslovakia. In her youth, Ramicova wanted to be a painter, but her parents worried that it wasn’t a financially stable career.

Ramicova spent much of her childhood watching plays, and her mother was an actress. So costume design seemed like a natural option — and it proved to be a wise choice. 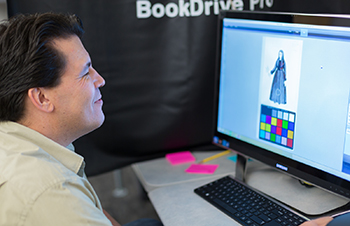 “My parents were right,” Ramicova said. “Costume design was a very rewarding choice of profession.”

Some of her favorite pieces include the operas “Nixon in China,” inspired by the president’s 1970s visit to China, and “The Death of Klinghoffer,” based on the 1985 murder of a Jewish-American passenger by Palestinian terrorists aboard a hijacked cruise ship.

For the past year, Ramicova has worked with the UC Merced Library on the digitization project. Ultimately, the collection also will include elements such as production documents, playbills, reviews and emails.

“I have a lot of documentation of how certain productions were created,” she said.

When the digitization is complete, the files will be loaded into the UC libraries’ digital management system. The collection is already available for general viewing through the public gateway known as Calisphere, which will continue to be updated as more images are added. Ramicova’s work will be physically housed in UC Merced’s special collections, and an accompanying website also is being developed.

Meanwhile, the public can view some of Ramicova’s work at an exhibit in downtown Merced. An opening reception is scheduled from 5:30 to 7:30 p.m. Oct. 16 at the arts center. On Oct. 17, a DVD of “The Marriage of Figaro” — featuring Ramicova’s designs — will be shown on a continuous loop in conjunction with ArtHop.