Students in Richard Gomez’s Arts 171: Art for Social Change course have had a special role in the Yosemite Facelift, an annual project that focuses volunteers on cleaning up Yosemite National Park in late September after its busy season. This year, nearly 1,500 volunteers spent almost 9,700 work hours collecting 14,762 pounds of litter and other waste from the park over six days. 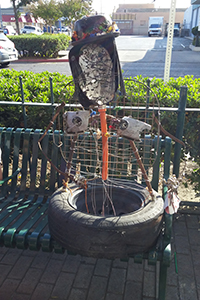 Gomez’s students created four figures from some of the materials volunteers collected. With names like “Sally Junk” and “The Trashy Mermaid,” the figures were on display in the park for a few weeks, and then made a brief appearance at last weekend's Art Hop in downtown Merced. They will be installed on campus Wednesday, Oct. 21.

Though the figures — like the one of a reclined figure made of trash— make commentary of their own, the communication is not one-sided. Each figure has an accompanying notebook so that viewers can share their thoughts and reactions to the pieces.

“The Recyled Figure Project was a big success thanks to the collaborative efforts of Jesse Chakrin and Jacob Croasdale of the Yosemite Leadership Program,” Gomez said. “We’ve already begun talks of returning next year.

“Everything I do in this class, I do for the first time,” added the lecturer who teaches for both the arts and the Global Arts Studies Program. “It's always exciting to see where the ideas will lead.  It is important for us to bridge our campus to Yosemite and include the community in our projects.  UC Merced is a very unique campus and we need to utilize what makes us special.”

The figures will be on display for about two weeks. One pair will be outside of the Leo and Dottie Kolligian Libary, and another will overlook the Beginnings sculpture from Science & Engineering Building 1.

There's no doubt that it's been a tough year. A global pandemic, political division, social unrest, wildfires and more have inundated people's...

A UC Merced professor's latest work has been selected for a pair of international film festivals this year. Global Arts, Media, and Writing Studies...

Beyond Cinema: Reviews Shared for Professor's Films on Immigrants and Refugees

Global arts Professor Yehuda Sharim's 2019 documentary "Songs That Never End" continues to garner attention both on and off the screen. The...