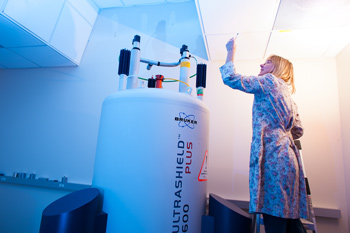 Biochemistry Professor Patricia LiWang calls it a stroke of luck that she has become enmeshed in HIV research, but her developments are no accident.

The National Institute for Health (NIH) apparently agrees, awarding her more than $2.3 million over the next four years to continue working toward a new method of preventing HIV from infecting humans.

The developments coming from LiWang’s lab and her collaboration with three other universities could have global implications in the war against HIV and AIDS.

LiWang studies chemokines, signaling proteins that are secreted by cells. On their own they are HIV inhibitors, preventing the virus from binding itself to cells.

“But the natural ones in our bodies aren’t so great at it,” she said. “So we started working on the biochemistry to make them better.”

LiWang, with the School of Natural Sciences, thought there must be a way to improve the chemokines’ natural abilities through biochemistry, and began making several variants. She also started working on another inhibitor called griffithsin.  But the big question when working with proteins is how to make them into medicine that can be used by people.  They can’t be swallowed or the stomach would digest them, she said.

That’s when she got the idea to partner with a bioengineer at Tufts University in Massachusetts who designed a silk-protein film that could carry the HIV inhibitors to places in the human body that are most likely to be invaded by HIV – the reproductive and digestive tracts.

HIV preventatives have been tested in the forms of pills, gels and creams, and have been introduced in places like eastern and southern Africa, where HIV and AIDS are still at epidemic proportions.

However, refrigeration there is a challenge and the creams and gels aren’t popular with at-risk populations, so getting people there to use the inhibitors regularly has proved to be a problem. Gels and creams are messy and must be used every time someone engages in sexual activity that could transmit the virus.

LiWang’s team has come up with a different delivery system – an easy-to-use, filmy suppository that melts with body moisture and is stable for months, even when temperatures exceed 120 degrees. The team is working on making the inhibitor time-released, too, so people could use it biweekly or monthly, making it more likely they would use it at all.

Professor Satya Dandekar at the California National Primate Research Center, chair of the Department of Medical Microbiology and Immunology in the School of Medicine  at UC Davis, plans to test the inserts in macaques to see if the silk films – which are known to be nontoxic – cause any inflammation. HIV feeds on inflammation, so that is a side effect that would not be acceptable.

Meanwhile, a researcher at Imperial College in the United Kingdom is using human reproductive and digestive tissue samples to test the silk films, looking for the same issues.

“At the end of the day, the question is: Will this work in humans?” Dandekar said.

She’s excited to be part of the collaboration partly because it’s a novel opportunity to test the inhibitors on systems that are the closest to human systems possible, but also because AIDS originated in monkeys. She believes primate testing could hold the key to HIV inhibition.

“We’ve probably cured every kind of cancer in mice, but we can’t cure all those cancers in humans,” she said. “We need to use animal models that are relevant to humans, and the primate reproductive systems are very similar to humans – and most appropriate for evaluating preventative measures for infectious diseases.”

Many studies are carried out in test tubes and petri dishes, too, Dandekar said, but those also do not present the full picture of what is happening in the whole body.

“All of this is a precursor to human trials,” LiWang said. “If we are ever going to be lucky enough to make the leap to human clinical trials, we need to find the optimal protein, make sure the silk films don’t cause problems, find out how long they can be used and whether there are side effects and work on the time-release aspects.

“But this shows how important basic research is. This work could, eventually, help people.”