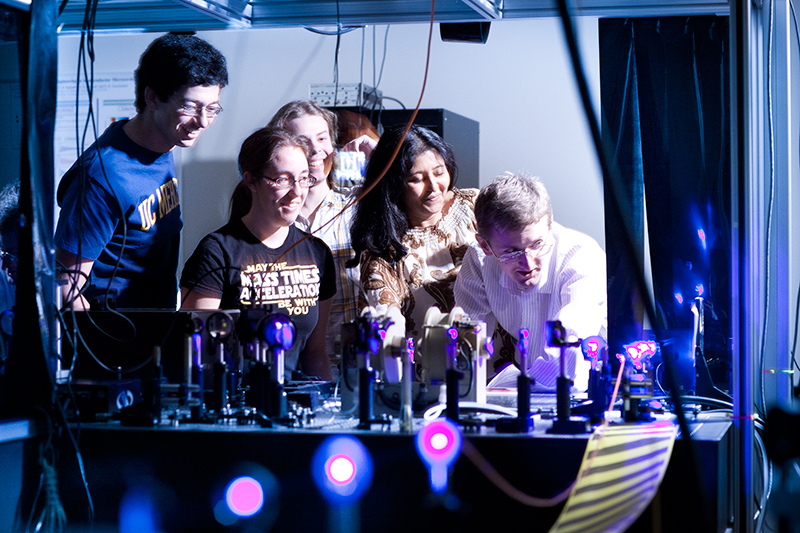 From understanding how groups of atoms behave at ultra-low temperatures to modeling how flocks of birds organize, UC Merced's Physics group is helping solve many of the world's mysteries and using the knowledge to improve technology, ranging from computing to solar energy conversion.

“Physics uses logical thought and experiment to understand the mysteries of our universe. It also allows you to translate that understanding into real technological advances,” graduate group Chair Professor Ajay Gopinathan said.

UC Merced's physics group has 12 faculty members and 41 graduate students, making it the second-largest program within the School of Natural Sciences. The group is also extremely diverse with 43 percent of graduate students being women or underrepresented minorities. Five of the 12 professors are also women, making it one of the most diverse departments in the country.

This summer, the program received approval from the UC President as well as accreditation from the Western Association of Colleges and Schools.

Though small, the group remains focused on a few key areas within the discipline, which offers prospective students and faculty members an environment ripe for collaboration and discovery.

UC Merced's physics group focuses on three main areas — biological physics, condensed matter and materials physics, and atomic, molecular and optical physics — that all connect to each other, allowing for collaborations that approach problems from distinct perspectives.

“We have a very focused goal in mind in who we're hiring and what we're going toward,” Professor Sayantani Ghosh said. “Whoever we try to recruit can see several possibilities for collaborations. They like the idea that we have so much interdisciplinary research in our university. “

For example, some of the materials research has applications into biophysics, and all the researchers studying condensed matter use lasers to understand the physical properties, Ghosh said.

To support its innovative work, the Physics group has been supported by four prestigious NSF Career awards and additional grants from the National Science Foundation, the Department of Energy, the Defense Advanced Research Projects Agency and the U.S. Air Force, as well as private funding agencies.

The graduate program has been increasingly attracting top-notch applicants over the past few years and was the first graduate group to reach the target student-to-faculty ratio of 3.5 to 1.

Amanda Tan is one of nine new graduate students in physics. She earned her bachelor's degree from University of Massachusetts, Amherst, and was drawn to UC Merced by the close-knit atmosphere that fosters collaboration and exploration. She had also considered pursuing an advanced degree at the University of Illinois and University of Texas, Austin.

“Every UC Merced professor was friendly and all the graduate students were really nice. I could picture myself getting along with everyone and having a good time, even with the stresses that come with graduate school,” Tan said.

Like other graduate students, she's spending part of her first year learning more about the different labs. This semester, she's working with Ghosh and Professor Linda Hirst, and in the spring, she'll work with Professor Jing Xu.

Ever since high school, Tan has appreciated the logic that drives physics. As an undergraduate, she conducted research in biophysics, looking at how organization in the cytoskeleton was crucial to how cells work and how it can affect neurological diseases.

“One thing that draws me to this area is the potential applications the research could have,” he said. “Control of individual spins in magnetic impurities in these semi-conductor structures could be used in spin-based quantum information processing devices.”

Additionally, the technology could be used for next-generation computer chips that incorporate memory and processing into one device.

Maelfeyt said physics captured his attention in high school because it focuses on solving problems.

“Once I started learning about quantum mechanics, electricity and magnetism, I was more interested in learning about how these areas are used in modern physics and in constructing modern materials and devices,” he said.

He's also is in charge of the undergraduate major in physics, a degree he said is incredibly versatile for students. Students who earned their bachelor’s degrees in physics from UC Merced have found rewarding career paths ranging from graduate school at UC Irvine, Davis, Santa Barbara and San Diego and Stanford University to teaching and industry.

“People hire physics majors because they're not afraid to work on hard problems,” Sharping said. “You're not afraid to go into something you don't perfectly understand because you're confident you're able to learn what you need to know.”

A new chapter began at UC Merced on June 1 with the completion of the massive $1.2 billion Merced 2020 Project, an extensive expansion of the campus...

University of California President Janet Napolitano has selected UC Merced student organization RadioBio as one of two recipients for the 2020 President...

While the COVID-19 pandemic has kept most students and faculty mentors off campus, UC Merced’s commitment to providing research experiences to...