Study Builds on Plausible Scenario for Origin of Life on Earth 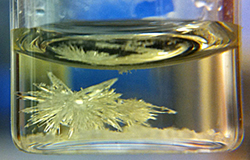 A relatively simple combination of naturally occurring sugars and amino acids offers a plausible route to the building blocks of life, according to a paper published in Nature Chemistry co-authored by a professor at the University of California, Merced.

The study, “A Route to Enantiopure RNA Precursors from Nearly Racemic Starting Materials,” shows how the precursors to RNA could have formed on Earth before any life existed. It was authored by Jason E. Hein, Eric Tse and Donna G. Blackmond, a team of researchers with the Scripps Research Institute. Hein is now a chemistry professor with UC Merced. The paper was published online Sunday.

Biological molecules, such as RNA and proteins, can exist in either a natural or unnatural form, called enantiomers. By studying the chemical reactions carefully, the research team found that it was possible to generate only the natural form of the necessary RNA precursors by including simple amino acids.

“These amino acids changed how the reactions work and allowed only the naturally occurring RNA precursors to be generated in a stable form,” said Hein. “In the end, we showed that an amazingly simple result emerged from some very complex and interconnected chemistry.”

The natural enantiomer of the RNA precursor molecules formed a crystal structure visible to the naked eye. The crystals are stable and avoid normal chemical breakdown. They can exist until the conditions are right for them to change into RNA.

The study was led by Blackmond and builds on the work of John D. Sutherland and Matthew W. Powner published in 2009 and covered by outlets such as The New York Times and Wired. Sutherland is a chemist with Cambridge's Medical Research Council Laboratory of Molecular Biology. Powner is a post-doctoral scholar with Harvard University.