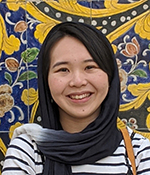 “I am the first person from UC Merced to win this award and it will really help showcase and promote the work IH students, like me, are doing to contribute to the field,” she said.

Leong is an aerialist who uses acrobatic arts to translate and communicate her work on female power.

She has also been awarded travel and research grants from the American Institute of Iranian Studies, the Society for the Study of Early Modern Women and Gender, and the Middle Eastern Medievalists, and she received the Fred and Mitzie Ruiz Fellowship. Her research has also appeared in Ajam Media Collective (here and here), Chicago Review of Books' Arcturus Magazine and IranWire.